As the Times and some Labour MPs try to provoke Jeremy Corbyn over the situation in Venezuela – ‘damned if he does, damned if he doesn’t’ – it must be galling for them to see that public favour has never been higher.

And even more striking because less transient, news forwarded by Felicity Arbuthnot, that an 8ft-tall artwork depicting North Islington MP and Labour leader Jeremy Corbyn has been unveiled on the side of a pub in Archway. The artist, Sam Collins, spent a month on the mural, crafted by putting together A3 plywood squares painted at his studio.

Tony Cullen, the owner said “I’ve never seen someone so honest and willing to be accountable. I love that he’s changing the political landscape, moving it to ordinary people away from elites . . . Jeremy seemed very embarrassed, but he said [he] appreciates the quality of the art – it really captured him.”

Too much saccharine? Turn to the readers of the Times, who say that JC draws ‘Fake crowds’, is a cult leader, IRA-lover and supporter of Islamofascist terrorist murderers. 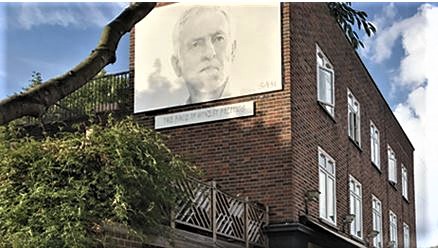 A more understated reaction: ‘The face of honest politics’.