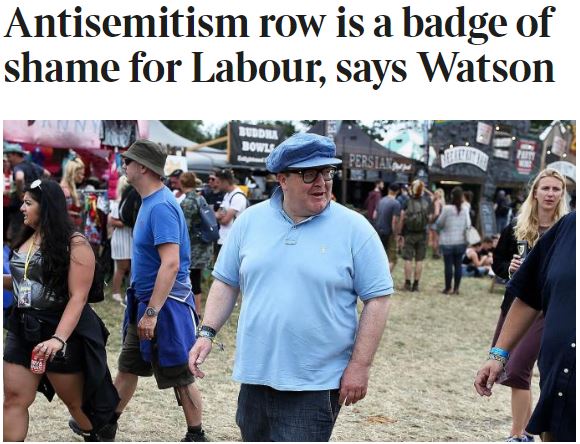 Francis Elliott and Kate Devlin report, in the Times, that Tom Watson declared “I am not Jeremy’s deputy” as he sought to distance himself further from the Labour leader.

The ‘badge of shame’ misleading/mischief making headline – not the first spotted in this newspaper – is belied by the text. Watson actually described the departure of Luciana Berger (MP for Liverpool Wavertree) as a “badge of shame”.

He told the Emma Barnett programme on BBC Radio 5 Live: “It is a badge of shame that Luciana Berger, a bright young female pregnant MP, was bullied out of her own constituency by racist thugs. I’m not putting up with it. I owe it to the 500,000 members of the party to defend their integrity against claims that we are a racist party or we are not dealing with racism.”

He repeated similar charges in Sky News – close to crocodile tears as he ‘feared’ that more MPs would leave the Labour Party.

And confirms another subversive move:  his plans to arrange a group of MPs away from the shadow cabinet to create their own policies.

Paul Mason predicts that that Labour will govern under Corbyn

In June 2016, Mason (below left)  wrote in The Guardian “One thing I do know: Corbyn is incapable of lying to the British people; he is inured to elite politics; he didn’t spend his entire life in a Machiavellian project to gain power and an invitation to Oleg Deripaska‘s yacht. That’s why I voted for him and will do so again if you trigger a leadership vote.”

“Wave after wave of smears are unleashed against Jeremy Corbyn – even if you accept, as I do, that he is an imperfect politician and that Labour has specific challenges with anti-Semitism, which it has handled badly . . . It is impossible to pick up a newspaper, or listen to a phone-in, without hearing some person earning six figures say the left is the main enemy of decent people and should be debarred from governing Britain until it becomes more like the right”.

He names some of the British establishment ‘players’ in each round of ‘anti-Corbyn mania’:

Wannabe establishment Labour MPs – 30 or so – cannot reconcile themselves to the idea of a socialist party that fights for socialism.

Mason continues: “From the right-wing of the PLP, through to the golf clubs of Tory-shire and the chatrooms of the alt-right, a shared mythology is being created. It says: Corbyn is too dangerous to run Britain, Labour cannot be allowed to govern with him in charge; better that it loses and loses badly; better that something is done to stop him. For the Blairite MPs it’s the same game as in May 2017: diss the leader, lose the election, normal service in the interests of neoliberalism will shortly be resumed”.

He sees a riven party, with a dysfunctional head office . . . from compliance issues to the mechanisms for selecting candidates, there is a culture of horse-trading which must be stopped..

“The Tory party has been bought and sold to the Saudi monarchy and the Russian oligarchy, and when Corbyn comes to power, that sordid menage will be cleaned up”.

To avoid this, during the next election campaign there will be the overt use of tactics used covertly in the Brexit campaign: “the full Monty of digital dirty tricks. For companies that specialise in rigging elections and destabilising governments, there will be a queue of clients”.

He ends: “So Labour needs a step change on three fronts”:

As it expanded, Labour began to attract people for whom the concept of being “left” was bound up – as has been pointed out by other contributors – with anti-imperialism and anti-elitism, rather than a coherent positive vision of socialism. Mason  stresses that we need to educate people in how to express differences respectfully; build a culture where people are educated in the values of the Labour movement: “If, amidst rising xenophobia and intolerance, an organisation – half a million-strong – is prepared to go out on rainy Saturdays and set up stalls arguing for migrants’ rights, or more generous welfare benefits, risking the ridicule of Guido Fawkes and Breitbart – what would be the logic of trying to smash it?”

There are numerous highly-talented centrist politicians sitting on Labour’s backbenches who could and should be in the shadow cabinet. Give them big positions and create a resilient alliance of necessity between the left and centre of the party, isolating the Blairite rump. Demand excellence from shadow cabinet members and replace those who can’t deliver it, regardless of past allegiances and reputations. That is Corbyn’s job.

. . . where people are educated in the values of the Labour movement and its diverse traditions, not just given a manifesto, a rulebook and a list of doors to knock:

“We need a movement that helps people develop a belief in their own agency – not the agency of states, religions, autocrats or, for that matter, iconic Labour leaders. That part is up to us”.

TeleSUR has published an article by Richard Seymour, a London-based author and broadcaster, which focusses on a plan ‘to orchestrate such media saturation of criticism and condemnation aimed at Corbyn, to create such havoc within the Labour Party, that he would feel compelled to resign’. Seymour continues:

“The tactical side of it was executed to smooth perfection, by people who are well-versed in the manipulation of the spectacle. And yet, in the event that Corbyn was not wowed by the media spectacle, not intimidated by ranks of grandees laying into him, and happy to appeal over the heads of party elites to the grassroots, their strategy disintegrated. This was not politics as they knew it”.

He explains the failure of the plan in context:

“(M)ore and more of the state’s functions were taken out of democratic control and handed over to quangos, businesses, and unelected bodies. Millions of people, no longer seeing much real choice on offer, began to boycott the electoral system. Party elites retreated into the state and into the manipulation of news cycles, having less and less to do with mass politics.

“In the context of the Labour Party, the result of this was that a generation of political leaders emerged who were experienced as special advisers, think-tankers, policy wonks and spin doctors, but had little real understanding of how to motivate activists and communicate with the broad public.

“In government, they were all too often advocates of state policy against their own popular base—tendency peaking with the Iraq war. And after years of having been embedded in the failed New Labour experiment, they were badly discredited among Labour members and among young people radicalizing in response to post-credit crunch austerity.

“Corbyn emerged in 2015 as the only leadership candidate who still understood how Labour politics was done, while also having a sense of how to fuse these methods with social media communications. And so it has proved again. The coup plotters knew all about how to manipulate old media, but they were at a loss when Corbyn stood firm, ignited his base, and thousands hit the streets in his defense, from London to Hull.

“What a strange time in British politics. The outcome of the attempted overthrow of Jeremy Corbyn is thus a hugely improbable and unexpected strengthening of the Left. Since the EU referendum result, 200,000 people have joined the Labour Party, the great majority of them supporting Jeremy Corbyn. Total membership is now approximately 600,000. The shadow Cabinet has become more left wing, more multiracial, and more female. Corbyn’s own standing, having withstood the extraordinary barrage of attacks and even some friendly fire, has emerged greatly strengthened. The coup plotters, weak and disorganized by their own miscalculations, disgraced by their links to and affinity with a discredited past, are an undignified mess”.

Richard Seymour is the author of Corbyn: The Strange Rebirth of Radical Politics. He has a PhD from the London School of Economics, and is online editor of Salvage.

Read the article here: http://www.telesurtv.net/english/opinion/Anatomy-of-a-Failed-Coup-in-the-UK-Labour-Party-20160707-0009.html. Our thanks to Felicity Arbuthnot for the link.

Disloyal shadow ministers resign – and not before time!

Now living in Jamaica, ‘african herbsman1967’, whose working experience in the Westminster village informs some of his UK-related blogs, realises that Corbyn’s biggest Achilles heel has been his former shadow cabinet.

He continues: “The mass resignations confirmed selfishness and a complete loss of any political acumen”.

“Given that David Cameron had just resigned on Friday and that an impending crisis in the Tory party loomed, the Labour Party’s shadow cabinet should have kept quiet and watched the meltdown in Thatcher’s party.

“But no, the Blairite and Brownite wings in the shadow cabinet resigned and took the negative headlines away from the Tory party. Marvellous.

“This Labour Party has managed to now look more of a mess than the current GOP under Donald Trump.

“No doubt the mass resignations were planned long before this weekend to force Corbyn to quit. The Brexit vote excuse is just a smokescreen. The plot to bring down Corbyn started the minute he was elected leader.

“Corbyn has shown better judgement as leader than I expected and that really surprised me. I feel that he should be open to doing more interviews with the local and international media to broaden his appeal.

“He brought thousands of new members to the Labour Party. He’s won a by-election and a Mayor of London under his brief leadership. His handling of Jo Cox’s death was mature and set the right tune.

“I also commend Corbyn for placing mental health issues at the heart of his leadership. To do all that with little support in the press and from fellow senior Labour MPs is remarkable.

“This is a real test for Corbyn to show his resilience, flexibility, acumen and leadership”.